The DeLorean is supposed to star in the Edition as the vehicle of choice of BGI executives (see also AE:BGI). If a good texture is available, it will be very easy to feature it in the trailer ( AE:Trailer ) by setting up one or two cutscenes (preferably showing the car on the move at the Airport or around the TCTF HQ). 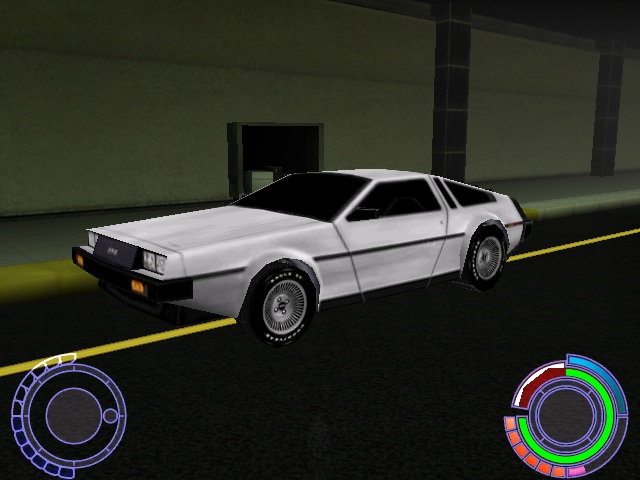 We want a luxury sports car with a dark, mysterious theme, basically an "evil twin" of the original DMC-12. The original's stainless steel is replaced with "black titanium", and the insets of black plastic will look best as chrome-plated pieces (door handles etc). That's for the basic color scheme (you can actually work off a negative of the original texture). As for the details, the important thing is to steer away from realism (headlights, front grille, wheel spokes) and towards the characteristic look of Oni's technology: blocky, minimalistic, sometimes cartoonish but reasonably practical on the whole.

Note that cars in Oni typically don't have number plates (probably electronic trackers instead). If the owner of the car is part of the AVATARA elite, the Ennis House symbol could be worn by the car as a "hands-off" warning to the TCTF. Also, according to the BGI theory, most of the civilian and military technology in Oni's world is made by BGI anyway, so a more or less discreet BGI symbol (see BGI ) can't hurt: on the front grille, wheel hubs, or back panel. Also, a recurrent motif on Oni cars and weapons (also found, e.g., on Barabas's armor and Konoko's glider) consists of three dots (holes) arranged in a triangle: those can be seen as a trademark of BGI/Musashi, or they can be a standard interface for the occasional diagnosis of the onboard electronics. Like the other civilian cars, the DeLorean can display this pattern in one or two places.

More specifically, the grille and wheel hubs need to have coarser detail: I suggest seven-spoked wheels, and maybe seven vertical louvres on the grille. The twin rectangular headlights, for example, could be replaced with an array of round shapes, or split in two in the other direction (two thin, wide lights on top of one another rather than side by side). I have no clear suggestion for the rear part except maybe using the Ennis House motif a lot (as a detail pattern on the "scales" covering the rear window, and maybe even for the tail lights themselves). Generally, don't hesitate to "cross out" the original design: the overall shape of the car is that of the DeLorean, but radical changes in design are all the more welcome as they make the car look unfamiliar, more like a new model than like a slightly modified DMC-12.

Issues to be aware of

Oni does support 24-bit colors, but then the textures can't have a reflectivity channel. If you want to use 1-bit reflectivity, then you have to settle for 15-bit color, and if you use 4-bit reflectivity, you have 12-bit color. Low color resolution will be a problem, because smooth color gradients will typically be posterized into shapeless blobs. It takes some extra awareness of the color space for the car to look good in 15- or 12-bit color. If you're not confident about that, just use 24-bit color and forget about reflectivity.

The fact that the car is supposed to be dark doesn't mean you should draw in dark colors: you'll lose a lot of color depth that way, and the posterized texture (if you choose to keep reflectivity) will look all the worse. Oni actually lets one tone down the color of cutscene objects at runtime, so make your texture as bright as you can (50% gray or even lighter), and leave it up to the engine to make it look black. While editing the texture, you can adjust the brightness at any time to get an idea of what the ingame car will look like.

THESE M3GM and OBAN are more than enough to record decent-looking trailer footage (a few extra OBAN for custom camera movements wouldn't hurt, but the manual camera is mostly fine). So far, I suggest "Airport" and "lab" as the filming locations (the airport for a more static shot, and the lab for nice driving dynamics); the TCTF scene is best saved for the Countach (we also have a Siva Spyder, sorta). Obviously, the DeLorean's TXMP is still very primitive, and the wheels haven't been retextured at all. Also, the "Blackvan" OBAN used here caused the car to be slightly oversized, so just avoid showing it together with characters for now. The texture is 512x512, so in Windows you'll need the Daodan DLL and on Macs you'll need the Intel build for HD texture support.