Hex Hounds are multi-purpose biomechanical entities used by META : 4 rather short legs, 2 huge arms.
Very versatile, they come in a variety of sizes and with a wide range of additional equipment.
They might have been modeled after 100% biological counterparts, the so-called Cyntaurs.

Original pictures available here: http://geyser.oni2.net/oni2/hexhound/ . However, the BeoQuad asset from DAZ3D (see below right) is quite close to the idea (except for under-sized arms). 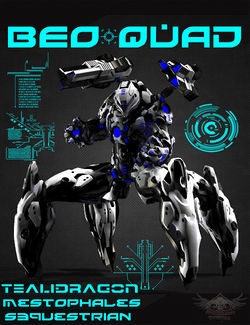 The neck and arms are way too short... 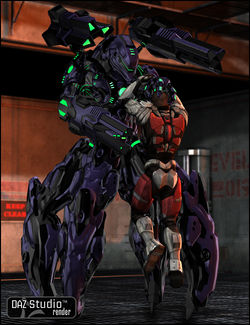 The basic concept is a skeleton resting on 4 massive legs, carrying 2 long arms and terminated by a stubby head on a long but thick neck.

Despite the oversized limbs, the Hound can curl up in a rather compact ball. It also has a number of versatile conformations (see below).

The 6-legged design allows for three major locomotion schemes, which are different compromises between stability and aggressivity:

Note
In the layout 2, the arms can be used for occasional boosts during locomotion ("gorilla-style" running, climbing) or for balance.
When they are not used, the arms can be folded in two and rested on the "hips" (chassis), with the elbow pointing backwards.
Also note
The front legs from layout 2 become the hind legs in layout 1. The body is upright in 2, as opposed to 1 (crawling).
Layout 2 is the natural locomotion mode of a Cyntaur. Layout 3 is basically equivalent to a Cyntaur "rearing up".

The oversized arms allow for devastating melee attacks, primarily in layouts 2 and 3 (layout 1 is meant for speed).
Additionally, one or several legs can be used to crush or trample grounded opponents, again mostly in layouts 2 and 3.
Arming some of the legs with blades allows for hybrid combat techniques, adapted to the alternative locomotion modes.

The arms are mostly intended for heavy-duty work (constructive as well as destructive) and attack (melee as well as firepower).
Additional manipulators can be located in the palms and elbows, as well as under the Hound's neck and head (sensors/feelers).

In most cases the locomotion addons may affect the combat skills as well (wall climbing, jumping, greater speed, etc)

Hounds that are not intended for combat situations typically have weaker armor and more complete manipulation modules.
Manned versions exist, with the driver placed on the back of the Hound (between the shoulders), upright in layout 2.

Most of these connections came a posteriori : the core design came pretty much by itself; 100% biological cyntaurs came first, with a few variants, mechanized variants next. The idea of a swift, blurred motion, with incredibly "elegant" envelopes for the Cyntaur's movements even though it consists of rigid parts is relatively new, and especially appealing as far as the graphical support is concerned (rendering that "creepy grace" is much more of a challenge for a 3D modeler/animator than for a 2D artist).

The one and only mech in Ray Bradbury's Fahrenheit 451, the Mechanical Hound is described in a vague and disturbing way.

The Mechanical Hound slept but did not sleep, lived but did not live in its gently humming, gently vibrating, softly illuminated kennel back in a dark corner of the fire house. The dim light of one in the morning, the moonlight from the open sky framed through the great window, touched here and there on the brass and copper and the steel of the faintly trembling beast. Light flickered on bits of ruby glass and on sensitive capillary hairs in the nylon-brushed nostrils of the creature that quivered gently, its eight legs spidered under it on rubber padded paws. [...] It was like a great bee come home from some field where the honey is full of poison wildness, of insanity and nightmare, its body crammed with that over-rich nectar and now it was sleeping the evil out of itself.
"Hello," whispered Montag, fascinated as always with the dead beast, the living beast.
[...] the great shadowing, motioned silence of the Hound leaping out like a moth in the raw light, finding, holding its victim, inserting the needle and going back to its kennel to die as if a switch had been turned.
[...]The Hound half rose in its kennel and looked at him with green-blue neon light flickering in its suddenly activated eye-bulbs. It growled again, a strange rasping combination of electrical sizzle, a frying sound, a scraping of metal, a turning of cogs that seemed rusty and ancient with suspicion.
[...] Below, the Hound had sunk back down upon its eight incredible insect legs and was humming to itself again, its multi-faceted eyes at peace.

"I was just figuring," said Montag, "what does the Hound think about down there nights? Is it coming alive on us, really? It makes me cold."
"It doesn't think anything we don't want it to think."
"That's sad," said Montag, quietly, "because all we put into it is hunting and finding and killing. What a shame if that's all it can ever know."
Beatty snorted, gently. "Hell! It's a fine bit of craftsmanship, a good rifle that can fetch its own target and guarantees the bull's-eye every time."
"That's why," said Montag. "I wouldn't want to be its next victim."

The Mechanical Hound leapt up in its kennel, its eyes all green flame.

Outside the house, a shadow moved, an autumn wind rose up and faded away. But there was something else in the silence that he heard. It was like a breath exhaled upon the window. It was like a faint drift of greenish luminescent smoke, the motion of a single huge October leaf blowing across the lawn and away.

The blowing of a single autumn leaf.
He turned and the Mechanical Hound was there.
It was half across the lawn, coming from the shadows, moving with such drifting ease that it was like a single solid cloud of black-grey smoke blown at him in silence.
It made a single last leap into the air, coming down at Montag from a good three feet over his head, its spidered legs reaching, the procaine needle snapping out its single angry tooth. Montag caught it with a bloom of fire, a single wondrous blossom that curled in petals of yellow and blue and orange about the metal dog, clad it in a new covering as it slammed into Montag and threw him ten feet back against the bole of a tree, taking the flame-gun with him. He felt it scrabble and seize his leg and stab the needle in for a moment before the fire snapped the Hound up in the air, burst its metal bones at the joints, and blew out its interior in the single flushing of red colour like a skyrocket fastened to the street. Montag lay watching the dead-alive thing fiddle the air and die. Even now it seemed to want to get back at him and finish the injection which was now working through the flesh of his leg.

Out of a helicopter glided something that was not machine, not animal, not dead, not alive, glowing with a pale green luminosity. It stood near the smoking ruins of Montag's house and the men brought his discarded flame-thrower to it and put it down under the muzzle of the Hound. There was a whirring, clicking, humming.

He could feel the Hound, like autumn, come cold and dry and swift, like a wind that didn't stir grass, that didn't jar windows or disturb leaf-shadows on the white sidewalks as it passed. The Hound did not touch the world. It carried its silence with it, so you could feel the silence building up a pressure behind you all across town. Montag felt the pressure rising, and ran.
He stopped for breath, on his way to the river, to peer through dimly lit windows of wakened houses, and saw the silhouettes of people inside watching their parlour walls and there on the walls the Mechanical Hound, a breath of neon vapour, spidered along, here and gone, here and gone! Now at Elm Terrace, Lincoln, Oak, Park, and up the alley toward Faber's house.

Out of the black wall before him, a whisper. A shape. In the shape, two eyes. The night looking at him. The forest, seeing him.
The Hound!

The innocent man stood bewildered, a cigarette burning in his hand. He stared at the Hound, not knowing what it was. He probably never knew. He glanced up at the sky and the wailing sirens. The cameras rushed down. The Hound leapt up into the air with a rhythm and a sense of timing that was incredibly beautiful. Its needle shot out. It was suspended for a moment in their gaze, as if to give the vast audience time to appreciate everything, the raw look of the victim's face, the empty street, the steel animal a bullet nosing the target.
[...]The camera fell upon the victim, even as did the Hound. Both reached him simultaneously. The victim was seized by Hound and camera in a great spidering, clenching grip.

The main features (full list of quotes HERE) are the living-dead duality (or the opposite image : neither dead nor alive), and the ghastly silence it makes when moving. All in all, the descriptions are always very succint : some creepy perfection and efficiency, a state of near-death whenever the Hound doesn't serve its only purpose (to bring death), and movements so swift and silent that they don't seem to qualify as life either. The blurred motion (assimilated to a cloud blown across the ground) is out-of-this-world, as well as the electric glow. The silent motion (because of the rubber padded paws and "perfect" articulations) are somewhat more fit for a feline that for a "hound"; then again, it has 8 legs, so...

This is the basic curse in Princess Mononoke. It is first seen on the boar god Nago : the boar is covered in a thick layer of snake-like tendrils/feelers. The resulting creature (a demon) doesn't so much run or gallop as it crawls, in a creepy, shapeless way, and at great speed. The motion and the outline of the creature are blurred by the restless filaments. The eyes of the demon don't seem to to correspond to the eyes of the boar god : they're located up front and wide apart, and glow with a red light.

Later, the great boar god Okkotonushi is also taken over by the curse. San is accidentally trapped in the mass of his Tatari Gami filaments and nearly dies, rescued in extremis by Ashitaka.

Off topic: the Tatari Gami curse eventually kills its bearer, but gives them supernatural strength in the meanwhile (another possible connection with the Daodan symbiosis).