Difference between revisions of "Talk:OME"

From OniGalore
Jump to: navigation, search

Hi. Just wanted to show my interest in this project of yours.
What format(s) are you planning to extract the models/anims to?

I wonder if we could somehow avoid double-work by integrating
OpenGL viewing (and import/export) of models and anims into OUP.
I've already done basic (interactive) OpenGL in C++ (with GLUT),
and Delphi also supports GLUT, so I'm having a little look at it...

Interfacing OUP with modules written in Java (via JNI or something) would be optimal.
As far as model/anim extraction goes, I recommend Pierre's OniRip as a reference.
The anims are fully documented here on the wiki, levels and M3GMs soon will be.

Hello, I just tried this on Mac OSX and got the following error:

oh, there is a talk page - didn't notice that

EdT, i think the exception rises because of the old JVM version you are using (they say this is the case)

Apple has not released Java 6 yet. I'll just have to wait...

and currently "u nas MMF, electrode, atomka, yaderka i teormech", so i'll try to suspend it until, say, March comes

so, today i finished m3gm viewer, and planning in future to extract it to some 3d model format
i don't have much 3d experience
i have heard of the 3ds format, which seem to be very wide-spread,
and seem to support all the features required (textures, animations)

maybe you give me some advice:
what 3d-model format can be viewed/modified on both mac and pc (or linux etc) with less difficulties?
it is required to support textures and animations

I don't know the ideal format you're looking for. For Serious Konoko, I've only had a look at the ASCII formats for Max and Maya.
Both encode the meshes in sensible enough ways, but the storage is not the same as in game-engine-friendly formats (Oni, SE2)...
I haven't had a close enough look at how these formats (and others like FBX) encode animations and whether it's any good for Oni.
The only format I've seen so far that handles a character animation as a set of separate channels is SE2's (Lightwave-inspired).
Another feature that appealed to me in SE2's formats is that animation collections could be shared/inherited just like in Oni.
I think you could just as well export meshes (or character body sets) as OBJ for a start, and add support for animations later.

i have made some research on SE2, and found this illustrative article (in russian)
also i have been searching for the 3d-model file specs, and found your post, submitted on 08-25-2006, 11:30 PM:

has the situation changed since that time?
i have found "SKATools.zip"
they say

seems that these are the sources for the exporter LWO -> SE2
is this the thing you asked for in that post above?

hello
do you mean oncc bodyparts? currently no - only a short list of in-game movable 3d objects (like fan, truck, plane, doors, powerups): big ones are also split into smaller parts

Please specify what formats you export meshes/animations to...
That's one crucial piece of info missing from the project page.

maybe, if some time animations exporting gets implemented
currently i have found out that 3DStudio displays nothing of the input 3ds file (and Deep Exploration too)
actually 3ds is like a sandbox for extracting, because it doesn't store normals data, and it is extracted in multiple files, and different limitations and so on
the preferred format is LWO+ (i asked mirex, he approved)

Mirex is probably a good advisor in terms of portability.
But I'm afraid that any proprietary format means trouble.
FBX and Collada have nice SDKs, and OBJ etc are ASCII.
For meshes and characters, I think OBJ is good enough.
Exporting level parts is a completely different story.
It would be better to export AGDB modules separately.

i haven't heard about collada before
seems that this 3d-format is the one i would prefer rather than any other one (since i am java minded, and java encapsulates XML)
but it is a relatively complex format, jugdging from the page count int the specification PDF
maybe one time i'll read it, and these 2 tutorials
actually it is already a trivial step for me to implement 3ds animations extration, since today i found some sources hidden in the sea of internet
but as for LWO+ - it is eliminated in my mind from now
as for levels - i don't think i'll write an exporter for them since they are poorly designed (for me)
i think it is much more rational to make new levels with high resolution textures and higher amount of details, and with some physics (как написали про какую-то игру: "поставили бочки - это, да, разнообразит игровой процесс, но для чего же их наполнили цементом?!")
actually my line of thinking was like it is much more difficult to create character models and animate them, than to create new levels
even more - models and animations, created by amateurs, would be horrible
but coding, texturing and level modelling is what oni fans can handle on an appropriate level
наш лектор (половина потока идёт на комиссию)

tonight i've been particularly thinking on what is OME supposed to do
in fact i haven't noticed that 3d-editors i've used before have only one animation track
that means if OME is supposed to extract all the animations, then 3d-editors' formats are not applicable
seems that collada can store multiple animations
so 3ds becomes more sandboxier
still i think i'll implement single animation extraction just to "finish the event chain" (like they say it in esoterics - unfinished business may take your powers; actually tonight i woke up, and there was a mess in my head about extracting animations to 3ds - it was like if i was insane; actually it happens sometimes - i create different insane theories, create new dimensions, new numbers, new figures, as if i took lsd before going to bed)

"then you can import it to a 3d-editor and maybe flip normals for some bodyparts" It's up to you, ku4um, to detect the polygons that need to be flipped, and export them properly ;)

i guess that face reverting can be done like this: 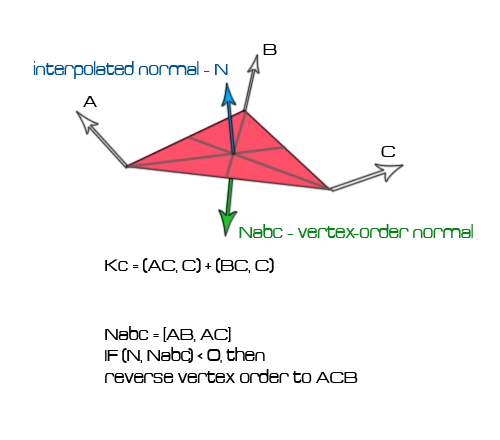 The issue is only with Oni's meshes and the way they're rendered in Oni. Basically, they're mostly using the face normals for backface culling, rather than the vertex order.
That is what happens for character meshes and animated cutscene objects. Certain body parts are obtained by flipping existing ones, which preserves correct face normals, but flips the polygons. Same for "cloned-and-mirrored" parts of a single mesh (e.g., wheels of a car). Therefore, if you export ONCC or OBAN meshes and preserve the triangles listed in the IDXA as strips, some of them will be culled incorrectly by 3D programs. Because 3D tools typically use the vertex order for backface culling. And because Oni does not use the vertex order at all for character and "object" M3GM - it uses face normals instead. The reason why these meshes have inconsistent vertex ordering is because that order is irrelevant to Oni. The only way to fix the order is to check face normals against triangle orientation. For character M3GM, the mesh is usually flipped as a whole, but for car wheels, you have to check every triangle, because the flipping may be limited to a part of the mesh (e.g., left wheel is not flipped, and right wheel is a flipped clone).

For powerups (and probably weapons, turrets, consoles, particles etc as well), they'not culling the backfaces, at least not according to the face normals. We know that because some face normals are just plain wrong for, e.g., powerup_shield, for example, has some messy normals, inconsistent with the layout of the polygons for some reason. There are normals pointing inwards for that one, so there is no way it can be culled based on those. Either it's not culled at all, or it's culled based on the usual vertex order (which, for powerups and weapons, is consistent). This basically means that you can export all these "minor" meshes without flipping the triangles at all. Since the normals can be wrong, just ignore them for these meshes (powerups, weapons, turrets, consoles, particles etc) and do not check them again triangle orientations.

Other than that, your algorithm for checking normals and flipping polygons is correct. If for the "interpolated" normal you use not the (possibly wrong) normals from VCRA but your own interpolation (and preferably evaluate the vertex normals as well), then you can apply that algorithm to every face of every mesh in Oni. You can, however, spare yourself that trouble and use the above rules. For character meshes, you only have to do the checking for one face, then flip the triangles for the whole mesh if necessary. For powerups etc, never flip the triangles. For cutscene objects, do an extensive check and flip every face individually, as needed.

The problem is just that, e.g., powerup_shield (and powerup_cell IIRC) has wrong normals (even pointing inwards), so I wouldn't recommend to handle these in the same systematic way as cutscene objects. As for the lack of a flag, you're correct, but the cutscene objects belong to the OBOA hierarchy, so you can detect them that way.

i.e. one can check all the OBOAs in the level, and if some M3GM is not part of those OBOA M3GAs, then it is not a cutscene object?

For example, yeah. Rather than backtracking the hierarchy, you can also list the cutscene M3GM directly through the ONLV tree.
I think the easiest way to handle this is to NOT bother detecting whether a mesh "is not a cutscene object". Here's my suggestion.
Unnamed meshes should only be listed and exported through their respective parents (ONCC/TRBS, ONWC, TURR, CONS, etc).
Named ones can be listed without any distinction, and viewed/exported in a silly way (no normals checking or triangle flipping).
However, you should also allow the user to list OFGA and M3GA meshes through their respective parents (i.e., additional trees).
When the user lists furniture/cutscene M3GM through that tree, THEN the normals will be checked before viewing or exporting.
So you have a lazy default behaviour for standalone named meshes, and an optional, more zealous checking for "array meshes".

normal flipping has been implemented
normal of a face is then defined as [AC, AB]
normals of bodyparts are not recalculated, normals of standalone M3GM are recalculated by averaging parent face normals

these days i have been fixing my university business (сдал зачёты и психологию - фрейд извращенец), and tried to add some functionality to OME
in this thread i have been requesting for support on COLLADA file format
today i've finished extracting from M3GM to COLLADA (and i might say that COLLADA is very natural, essential, or whatever)
you can get a C++ COLLADA loader here (a bunch of sample models is included, even with animations)

skeletal data has been implemented
also, while testing the exporter, i've found that only this COLLADA loader gives satisfactory results
i've googled a bit, and haven't found any other COLLADA loader (even 3DS MAX doesn't load the exported DAE files; btw, they have written there "Autodesk (.FBX, .DAE)" - i think someone may trail them for this)
maybe you've met some other satisfactory COLLADA loaders?

thanks, i'll try these out

Thanks for letting us know. It seems that the whole site is down. Check the article on OME again for a new download link. --Iritscen 23:59, 18 February 2009 (CET)