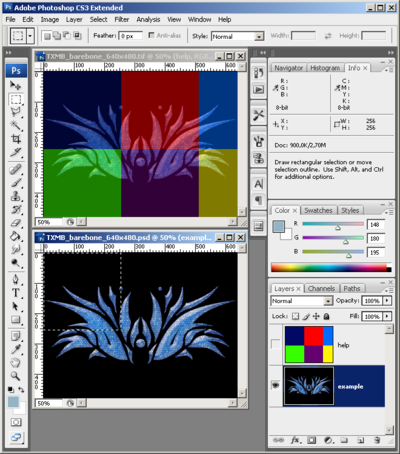 You can create the TXMB manually by splitting a large image into pieces, converting them to TXMP.oni files with OniSplit, and then referencing them in a TXMB.xml file in the format given under "General information". Note that the intro screen PSDs linked to under "Splashscreen template" have built-in guides for quick slicing of an image (see the read-me in the ZIP). Once you have converted the slices to .oni format and have written the TXMB.xml file, pass it to OniSplit with the "-create" command to get the TXMB.oni file. You now have the TXMB.oni and TXMP.oni files that you need to present a splashscreen in your level.

It's much faster to use Vago to create a TXMB and its constituent TXMPs — see Vago's menu item "Tools>Background Image Wizard".

Algorithm to split an image for TXMB

The following algorithm seems to work correctly in generating a 640x480 TXMB, the size that is used in vanilla Oni. The algorithm is currently used in Vago for TXMB creation. It works as follows:
Try to fit 256x256 images into the TXMB's space until you aren't able to add any more images of that size, then find the remaining width/height left to complete the TXMB. Example:

*We add an image of 128px width, because anything more would overflow the TXMB's 640px width.

**We add images of 224px height, because 256px height images would have overflowed the TXMB's 480px height.

There are three TXMBs that Oni automatically loads by name upon specific events:

These files are looked for in the specific level's folder. If they are not provided, the engine simply skips them.

OniSplit does not offer to extract TXMBs to a single composite image made up of the individual TXMPs. It will only extract to XML a list of the TXMP names. If you have ImageMagick installed, use this command on the TXMPs to reassemble them into one large image:

ViciousReilly provided to the community the following Adobe Photoshop templates that allow any modder to create similar splashscreens to the ones found in the original game. If you use the templates, please give credit to ViciousReilly for his work!

The Xenotron font, used by Oni and by us in these templates, can be downloaded from the Xenotron page.