Difference between revisions of "Zukai"

Zukai is the most recent attempt at multiplayer for Oni. Zukai is in an alpha-like stage of development for macOS until it reaches v0.1, at which point it will be ported to Windows, and development will continue on both platforms. It currently comes in the form of a bundle called Daodan.plugin and an Oni level plugin called level0_Zukai with supplemental resources.

Zukai is a Japanese word connected to the ancient art of puppetry and puppet theater (bunraku). Its usage in this project is based on the expression Ningyō Zukai ("Puppet Master") in Ghost in the Shell, though translations of the word zukai alone range from "messenger" to "operator" to "familiar spirit" to "trainer". The icon for the project is based on the kanji for another word for puppetry, ayatsuri (操り).

Note: You must start with a vanilla Oni installation. Zukai does not yet support mods or the Anniversary Edition. 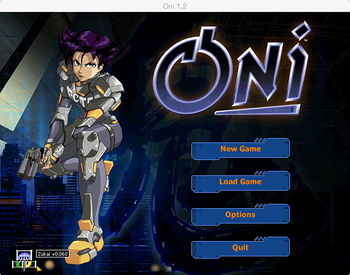 Look for the Zukai icon in the bottom-left before proceeding. 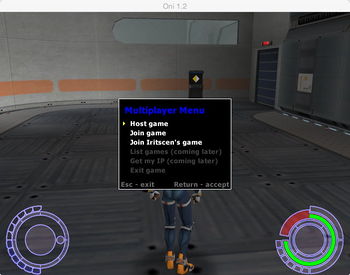 Use the arrow keys to navigate the menu.

This performs ad-hoc code-signing, which takes the place of an official developer certificate. If successful, you will see output like this:

If it does not work, try the command several more times; it often doesn't seem to work on the first try. However, even if the signing is successful, you still have to tell macOS that the app is allowed to accept incoming connections, which means that you will get the dialog again the next time that you host. Once you click that "Allow" button one more time, macOS should remember that this "signed" copy of Oni can accept connections.

At the moment, Zukai is still rough, but the following problem areas will be the main focus of future updates until they are all corrected.

In addition to the standard actions that you have always been able to bind using key_config.txt, here is a list of actions added by the Zukai plugin for use in multiplayer mode.

Both hosts and clients can use these actions:

mp_menu
This brings up the Multiplayer Menu when you are in-game, allowing you to host, join, or exit a game.

mp_score
Holding this key down displays the scoreboard, along with match time and player ping.

mp_graph_toggle, mp_graph_cycle
To turn on, and cycle through, graphs that display information about the state of the multiplayer game. The network graph shows the size of incoming and outgoing traffic, and the timing graph shows how much time the multiplayer code is taking to execute in each frame.

These actions may only be available during this early phase of Zukai's development. They allow the host to change network settings for all players during a match, in order to see how performance is affected. You probably will want to talk to me before using them, but here they are:

latency_toggle, latency_up, latency_down
To turn on and adjust simulated latency. This feature is intended for use in matches with negligible real latency, e.g., LAN/loopback games, to reproduce the feel of an Internet game. If used in an Internet game, this will add additional latency on top of whatever natural latency already exists.

jitter_toggle, jitter_up, jitter_down
Simulated jitter (variation in latency) is automatically turned on when simulated latency is turned on, but you can use these actions to turn it off (to get flat simulated latency) or to alter the amount of jitter.

pkt_rate_up, pkt_rate_down
You can send gameplay data more or less frequently using these keys. The rate is measured as a delay in ticks, so raising the rate leads to sending data less frequently.

state_rate_up, state_rate_down
State events are communications between the client and the host which determine a client's correct position. As above, higher numbers mean less frequent events.

pos_tol_up, pos_tol_down
Not currently used. The "position tolerance" is how many world units a client's position can differ between his avatar on the host and his avatar on his own machine before his position is corrected. Higher numbers will mean that games are permitted to go further out of sync. Lower numbers will cause more frequent adjustments in position for clients. A world unit is four inches, so a position tolerance of 3 means "one foot".

sync_now
This is for developer use and does not have any effect in the MP builds which I am distributing.

When Zukai first runs, it creates a blank zukai_settings.txt file in the same folder. You can change certain settings from their defaults by assigning values to them with this syntax:

Here are the settings currently supported: