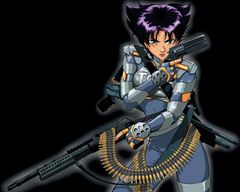 Box art iteration: same framing and armor design as Lorraine's original, but without any "wear and tear", and with a confident smile on Konoko's face. 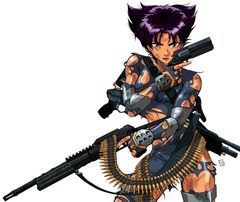 Lorraine's original that Jacen had to "de-blam!-ize" before it could be used for packaging and in kid-safe public spaces. 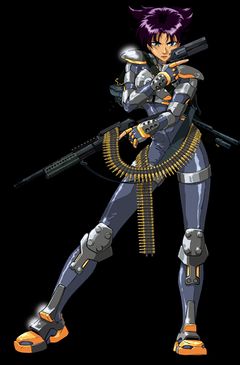 During Oni's development, Lorraine Reyes drew a piece known by fans by various names such as "Torn Suit Konoko" (shown on the right, white background). Available versions of this image are discussed HERE, as well as Lorraine's regret in depicting Konoko in a more sexual way than she wanted the character to be seen. When Take-Two took ownership of the property and was going to advertise the finished product as well as design the box art, they too apparently wished for a less revealing rendition of Konoko, but otherwise were OK with the intimidating and firepower-heavy composition nailed by Lorraine. It was then that Jacen Burrows was brought in to redraw Konoko's bodysuit and armor whole and intact.[1] The resulting piece (shown on the immediate right) was used as the official box art of most of the game's releases, as seen HERE.

Jacen was also subsequently asked to add the rest of Konoko's figure to the image (bottom right); Lorraine's original drawing never extended further down than the tops of her legs, and Take-Two apparently wanted a full-body shot of Konoko for use as a cardboard standup that could advertise the game in stores.[2]

In the end, a separate piece of art was also commissioned from Burrows in which Konoko did not carry any guns and was simply in a fighting stance, which was kid-safe enough to display in stores like Toys "R" Us. This alternate standup without any guns or nudity is closer to Jacen's own style (rather than a carbon copy of Lorraine's) and uses a completely different pose than the art discussed here.

At first, the Konoko in the standard "box art" version (top right) may look the same as in the full-height piece (bottom right), but there are many small differences.

It seems likely that Burrows's second take on the "fully armed Konoko" was an opportunity for him to bring Konoko's appearance in line with Lorraine's latest promotional art, rather than the older iteration from the time that "torn suit Konoko" was drawn. This was either a requirement from Take-Two or Burrows's own initiative. Maybe the motivation was merely to achieve a consistent style for every piece of new promotional art, or maybe the box art's resolution was deemed insufficient for large-scale standup use.