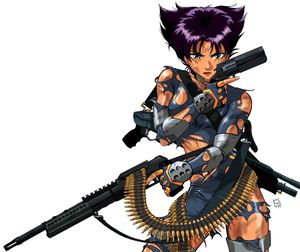 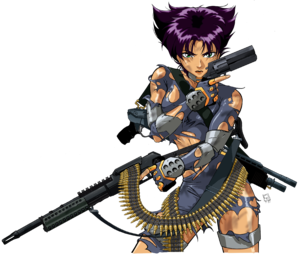 "Torn Suit Konoko" is a fan-applied name for this image of beaten/torn gunslinger Konoko, as drawn by Lorraine Reyes. This image may have originally appeared on the cover of PC Advisor magazine. Although she cannot do so in the game itself, Konoko carries three weapons:

All 3 guns have been modeled by 17secs and are available as low-poly OBJ HERE.

Lorraine said of this work: "I'm proud of it technically, but I wish I'd never drawn that cheesecake picture of her all torn up with three guns on her, wrapped in bullets — it's not the way I wanted to see Konoko portrayed." Various comments by Lorraine and other Bungie staffers confirm that an overall goal for Konoko's character was to avoid making her a sexualized heroine. See the article Fully Armed Konoko to learn how the image used on the box art came to be, which restores her bodysuit and armor.

The "Torn Suit Konoko" image is a fan favorite and been used in multiple wallpapers, including: