See History of Mac Oni for the story of the officially released builds of Oni for Mac. 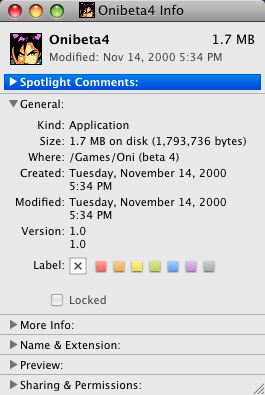 The application's version number is 1.0, as opposed to retail Mac Oni's v1.1, and its creation date is 11/14/00, which corresponds to the period of time that Oni was in beta testing.

Over the course of Oni's development, a few betas apparently leaked, though only one, a Mac beta, has been preserved. Also worth mentioning is the German localization; because it was found to contain some files not meant for the release version, it was once known as the "Big Blue Box beta", "BBBB", or "Mac beta 5", though it is now understood to not be a beta.

During Oni's beta testing period, specifically in November 2000, a copy of the entire Mac version of the game was leaked, identified as "beta 4". Also leaked was a list of cheats. After Oni was released, fans were intrigued by the "Developer Mode" cheat "thedayismine", but found it did not work in their retail versions of Oni. By contrast, Dev Mode was found to still be active in beta 4. It was initially assumed that the code for Dev Mode had been removed before the retail build was made. Later on it would be discovered that the retail Mac (and Windows) Oni still had a partially-functional Dev Mode, but the cheat that enabled it would need to be unlocked by engine patching; beta 4 is the only version of Oni observed to have Dev Mode freely accessible.

Additionally, this beta still had all the BSL functionality of the Windows version; it had previously been thought that about 40 functions and about 160 variables were stripped from the code used to build Oni for the Mac, since the Mac version was finalized a bit later than the Windows version. Having seen from beta 4 that these functions and variables were once present in the Mac binary, the community set about searching for them in the current Mac app at the time, The Omni Group's Mac OS X port, and found them. Through hex editing, pointers to active BSL variables and functions that were not of much use were diverted to point to some of the hidden and more useful ones. Those changes effectively brought the Omni app to near-parity with the retail Windows version.