The Iron Demon is a mecha boss that was initially supposed to appear in Oni, but was cut at pre-beta.

These are our best in-game looks at the original model:

There's also this screenshot used in some print ads: 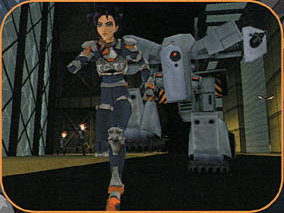 In the 1999 trailer, the Iron Demon can be seen in two scenes: one brief shot in the Regional State Building and one extended walk sequence in the unreleased MP arena The Pit (slowed down for careful inspection):

The clearest appearances of the Iron Demon in 2D form are:

There have been three fan attempts to recreate the 3D model for the Iron Demon by inspecting the visual evidence we have from the pre-beta period: