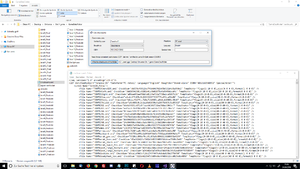 It had been (no) fun

No fun, because I tried many things and specialized in nothing.

Fun because at some point it was, hitting your teeth into problems, making discoveries, chatting with the other seniors.

We made a little bit of game history, not exactly by being big, very successful or mainstream but by pushing the boundaries of this unique and unmatched game.

When I had beaten the game, it didn't felt like victory at all. Mai's world was dying. What shit ending was that? Unacceptable.

Next stop Google, Oni 2, nothing. I found the old forums but didn't participated, the language barrier was still too big.

Harry hosted the forums, he got us some interesting interviews from Bungie West developers.

I occasionally replayed the game and thought about a sequel. With time I shifted into modding. It was fascinating to change things and play scripts of others.

Some smart dudes wanted more: they took a hex-editors and what not and began to document the binaries and wrote modding tools.

This hex era was mostly tinted by SSG (documentation), Alloc (OUP, OniTrainer), and Loser (utilizing and famous for AI mods). Of course there were others but they were more of our brave shadow army.

As you can guess Script10k wrote a ton of BSL, getting better and better. Those kind of mods reached its peak with Oni Team Arena.

With the appearance of Neo and his tool Onispit modding shifted from hex-editing to read and write XML as an intermediate layer.

With a convenient way to change the binaries the by now senior members created the Anniversary Edition project, whereas Gumby wrote the first version.

SFeLi, RossyMiles, and then Gumby wrote the Daodan extension which added a few new functions, cheats and bug fixes. Gumby even made a half-working multiplayer mode.

EdT was also a long-time member who experimented a lot. The two of us documented XML, workflows, especially level import.

Beside levels EdT and Samer created quite a lot of characters. Personally, seeing how EdT added Bobbysoon's Iron Demon back to the game was glorious moment.

In the meantime we also had fun playing Pierre's amazing Konoko Payne.

I guess at that point we were somewhat overfed with Oni's design. So the next big thing that happened was a complete atypical level, Old China.

After years of effort, there were the knowledge and the tools to pull off that kind of thing - only hold back by the limits of the old engine.

Samer was like the only one that created a complex level on his own, the Wilderness Preserve, in which he used my trick of "uneven ground" creation.

Getting to know the Omega Vault and playing Oni 2 was a disappointment. I kind of wished that they didn't told me.

Geyser was our always constructively nagging, backseat-moderating universal genie, initiator of the wiki and "A Storyline for Oni 2" monster thread. Felt, he was involved in just everything.

He, Seventeen Seconds and Guido more or less secretly worked on the Wasteland Flowers project, which Guido turned into a graphics novel several books long but sadly never released.

For a journey that long, it almost passed like in a blink of an eye.