(You can try to edit the final ONLV*.oni on your own. See HERE.)

I only tried it once like an year ago, probably something was wrong with it.

Recently I tried to do similar with xml editing.

So far the theory. In praxis the model will appear differently.

While a folded (not animated) corpse imports fine, a corpse with rotated bones becomes a mess.

With local values at least the pelvis looks correct.

So what's the problem?

This method doesn't seem true for CRSA. With local rotations used, the pelvis was spawned correctly but not the other parts.

Due to this observations I think each body part is looked up separately which means for Oni to build the corpse with no hierarchal structure.

To test this I took a character, rotated the parts, and destroyed the hierarchy revealing the true local rotation values of each part.

Those rotations and positions where entered into Neo's matrix program (https://dl.dropboxusercontent.com/u/139715/OniGalore/OniMatrix_src.zip, dead link). I then put the matrix to into the CRSA instance of the extracted ONLV file, then reconverted to oni.

Ingame, the corpse was looking quite good (https://dl.dropboxusercontent.com/u/139715/OniGalore/CRSA_manually_imported.png, dead link). There were some tiny difference which possibly come from the fact that the matrix program works with integers and not float values.

Here's an example (https://dl.dropboxusercontent.com/u/139715/temp/snipers.dae, dead link) of an intact and a destroyed hierarchy.

When we apply null objects to each body part and compare its local values with the parts of the destroyed hierarchy, the values are the same, just multiplied by -1.

Second experiment. When the parts in the intact hierarchy becomes rotated, the values will not fit. Not until we reset the null's global values to 0; 0; 0 and multiply by -1 again.

What does this mean?

Still I've no clue how to calculate the required values but with the null objects it got a lot easier to farm them.

So coding a workaround became a feasible option.

It's possible to calculate the local rotations in a hierarchy using matrix multiplication. The final matrix must be inverted and the xyz values multiplied by -1.

Before calculations are started the rotation order of all objects must be changed from ZYX to XYZ.

What makes the code bulky is the need to go through all involved body parts and that 19 times.

The code seemed to work fine until different rotations were used for all objects in the hierarchy. So for now there will be no simplification.

Regarding Pathfinding on uneven ground, my testing shows that it will work as long as the top of the ground is 20 world units or less above the BNV, any higher and the grid is no longer active and the AI will not move. EdT (talk) 18:08, 21 August 2013 (CEST)

I had another look on the original pathfinding and noticed that ghosts aren't equally high... My test level didn't used ghosts at all, just one BNV, so OniSplit probably added some default values. (Maybe this also explains our different test results.) -- After splitting the BNV and adding high ghosts (https://dl.dropboxusercontent.com/u/139715/OniGalore/BNV_test_2.zip, dead link) the Strike was able to run on a plain that was 42 above the BNV. More testing could be done to determine the max height (if there's any). --paradox-01 (talk) 15:43, 23 August 2013 (CEST)

The tall ghosts work! Here is video from my old Outside level with updated bnvs and ghosts: http://www.youtube.com/watch?v=Yj3ptZnZtx0 EdT (talk)

Okay, thanks for the warning.

I remembered some old screenies and assumed it would be possible. Don't know where those were posted. Probably those object don't have collision at all. :(

Those hoops are ONWC weapons. Screens were created by Geyser shortly after the "chair video" discovery, that weapons can be kicked around by A.I. characters (and they even emit sound as they are dragged around) and thus it could be possible to simulate movable obstacles as unpickable weapons. The idea sort of failed because:

Still, with the daodan.dll now being used to patch executable, this idea could come to life again again, if certain tweaks are done (player included in weapon-character collision, addition of BSL commands to work with weapons).

Textures that are not power of two

If you have textures that cause a crash because they are not power of two, please post here those *.oni files.

Maybe it's possible to create a very big sphere or dome that covers the entire level (and let Oni's skybox unused). If it's doable it could avoid ugly lines of the skybox coming from OpenGL rendering.

New issues appeared that need to take care about:

The brightness can be somewhat influenced by BSL commands like with gl_fog_..., gs_farclipplane and must be set adequately.

The dome seen in the screenshot has a texture size of 512x512 and hence looks quite pixelated.
The problem might be solved by splitting the dome into sectors and giving each sector its own texture. 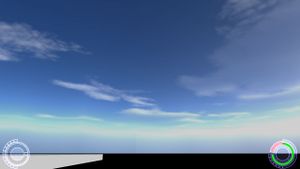 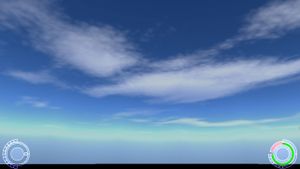 Texture boarders have darker pixels so the UV must not reach them. Also after splitting the textures inside the editor there will be little distortions but they are still noticeable enough to make the sky look odd. Fine-tuning the UVs didn't really help.

I consider this as a fail. Oni would need bigger view range and a texture support of 2096x2096.

CJBOs and the shared folder

You should be able to use the original OBJC files with the master xml file. But at the moment (v0.9.90.0, Win7 64-bit), BINACJBODoor.xml wants for example:

it should be just one line because of the keyword script

Neo could update OniSplit so that it is searching specific strings in object names of a dae level file.