Parts of page in need of updating

I've placed the "update" template on this article for the following reasons:

What we know and not know

Animations never stop, they flow from one to another.

The default case is a character getting spawned and then just standing there, he idles.

This brings us to the core attributes of an animation: type, state, variant. (In XML it is varient. [sic])

Theoretically you could recycle all attribute and build your own animation system, but that would not much practical.

The prone mode mod is an exception, in the context of the existing system it can be considered a logical expansion where BSL handles the transition.

Now then, the idle animation does not link to a specific followup animation - or for short "anim" - it rather links to a state being followed.

Ironically all anims have a <FromState> and a <ToState>, but no obvious <CurrentState> which can cause confusion on what the current anim actually is.
This gives us two options of how to think of the situation: either consider <FromState> being usually the <CurrentState>, or states exist only between anims and serve as transition rules.

Linking to a followup state allows for multiple choices of what specific anim comes next. An anim is picked up randomly from a pool of valid anims. Their probability or <Weight> is determined by TRAC - the anim collection.

The Ninja's Moonwalk anim (taunt2) has only a 5% chance of getting picked.

There's also a rare chance that Mai will sneeze if she stands for a long time.

Here's the sneeze anim with Weight 100, but the real chance of getting picked is still low. Why?

That's because all idle anims are in fact of type Stand while Konoko's idle_spec3 is of type Idle.

Anyway, to let an character flow from one anim state to another the <ToState> is used.

Let's say a SBG grenade hits Konoko. The particle's damage type is blownup, this and the direction of damage force an anim of type Blownup or BlownupBehind to play like TRAMKONOKOblownup1.

This all simply means she falls to her back, going into the FallenBack state. The engine picks up next anim with <FromState>FallenBack.

Also, receiving damage puts the character into Combat mode so further anims will be of variant Combat.

But if the player gives no input Mai will remain on the ground as <ToState>FallenBack creates a loop.

It differs in its <Type>. Obviously most anim types are bound to user input and therefor are excluded from the automatically created pool of valid anims to follow.

A left mouse turn tells the engine to use an anim of type StandingTurnLeft.

This is true for KONOKOcomb_turnlt and KONCOMgetup_lt but only the latter matches the current <FromState> condition.

KONOKOcomb_turnlt has in fact <Varient>Combat, comb stands here for combat, not combo. Following Oni's naming convention, the file should have been named KONCOMturn_lt.

Knowing this behavior we can deduce that anims types registered to user input will make the engine ignore all the automatic anims inside the pool, therefor breaking the loop of KONCOMfallen_back.

Since KONCOMgetup_lt has <ToState>Standing and Konoko is still in Combat mode the following idle anim must also have <Varient>Combat.

Konoko will eventually calm down when her ONCC<FightModeTimer> run down and then KONOKOidle1 or KONOKOidle2 will be played.

Actually the COMidle will continue until an non-combat anim will break that loop.

That is the fallback behavior of anims getting picked: if the engine cannot find an anim for an active variant (or "mode") it will choose the normal (non-variant) version.

As for combinations of variants, it's possible, yes, but rarely and only Sprint and one weapon variant at a time.

Problem with exporting a textured character with non-native TRAC animation

This problem occurs with OniSplit v0.9.99.0 and earlier.

There are basically two commands:

The second cannot export characters with textures at all.

A textual comparison with WinMerge reveals that the outputs of native TRAMs are almost the same. 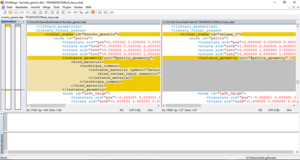 It follows <visual_scene> where the id has a different name which is not that interesting.

Inside, there are <instance_geometry> nodes which are pretty much empty for the second dae.

I restored only a few bones. Proof of concept.

In other words: for a complete textured and animated character you need to post-edit the dae which is actually xml code.

If we doesn't get Neo to fix it we will have to export the character twice automatically and let the OniSplit GUI provide the final dae.

I added a "Repair character textures" option to "Simple OniSplit GUI", though that feature wasn't tested very much.

Download this modding environment so you know that the following lines are about.

Before you can run those files you need to put your source files into the "input_folder".

"dae to xml(41).bat" will generate files with EKeys.

We want to type as less as necessary, don't we? =)

Keep in mind that the GUI is only a mask for onisplit. New onisplit versions - v0.52.9.0 or newer don't have the command -create:tram.

You can convert such animation by choosing one of the two methods. (normal = no overlay anims)

- To create QKeyed-animation you need a helper xml file to be placed alongside the dae animation file.

In any case the amount of needed hand work is quite the same for both methods.

QKeyed-animation refuse to become edited. There's somehow a bug like Samer pointed out on the forums. (Is this still the case? - 5th Dec 2011) But that's not so tragic. You can edit the dae or the xml helper file and then merge them into an oni file again.

Like EdT said an advantage of the xml helper method is that you can breakdown a single dae file into smaller pieces. It's a comfortable way to create multiple animations from one source. E.g. you make combo animations in one dae - let's say punch (p), kick (pk), punch (pkp) - then you make 3 xml helpers. First file goes from frame 0 to 40, second file from 41 to 86, and third file from 77 to 140. The dae file has 120 frames but not the 3 oni files that will be created.

Some lines for the hypothetical second combo animation:

Don't forget to add types, variants, particle etc. to your xml file before you convert it to the oni format.

Either put them into an AE package or create a plugin.

There's a batch file available that create level0 plugins. Put the created plugin files in your GameDataFolder and run the game.