This page was for a project-oriented development of BGI in the Anniversary Edition. For the factual basis of this project, plus some fan elaborations, see BGI. For a plan for a new level based on these concepts, see User:Iritscen/BGI.

Role of BGI in Oni

The basic idea is that BGI, a "suspected Syndicate front", are a double- or triple-agent entity. As a worldwide industrial monopoly, they provides most of the technology in the WCG world (pretty much like DAIWA in Vexille). They also assist Muro's criminal organization when it comes to logistics and infrastructure; however, BGI are also a stronghold of the "old" Syndicate f.k.a. the Network, which Muro has neither beheaded nor dismembered during his rise to power. Thus BGI resent the alienation brought about by Muro, and secretly oppose the STURMANDERUNG project.

The WCG is aware of the ongoing militarization of Muro's Strikers. The TCTF are hardly able to maintain a credible image as peace-keepers in the media, let alone to actually thwart Muro's plans. In this situation, WCG officials have resorted to a pact with BGI, whereby BGI are free to develop paramilitary technology in order to face the threat represented by Muro. Griffin is unaware of that pact and proceeds with his own initiative: both the WCG and BGI view this as part of the problem and will attempt to disrupt the TCTF's Daodan project through legal pressure or sabotage.

BGI agents will monitor Konoko on her early missions and, when Griffin fails to contain the threat that she represents, will do their best to take her out of the equation. Since BGI's paramilitary is not supposed to exist, witnesses will be avoided (or eliminated) at all cost: massive use of phase cloaking (and perhaps self-destruction upon failure) will complement the deadly weapons and fighting techniques of the "anti-Daodan" squads. By confronting and possibly disrupting this new entity, Konoko will once again position herself as the only one who can defeat Muro.

These are the guys supposed to deal not only with Muro's Strikers, but ultimately with (Mutant) Muro himself. Not bound by the WCG's regulations, they are physically enhanced by cyborgization and/or doping and thus can carry a full body armor similar to Barabas's or Mukade's. Or maybe they're just robots.

An obvious first take on the BGI trooper was to toy around with the Spartan design from Halo. The character wasn't designed by the same guys who worked on Oni, but the final model has features that remind both of Oni's TCTF SWAT and of Mukade. This double similarity makes all the more sense in the context of Oni2:Truth Number Zero (in which Mukade used to be part of BGI before Oni). Of the existing textures, the black variant is perhaps the least reminiscent of Halo and the most fitting in Oni's universe. Permanent phase cloaking and self-destruction would limit the sightings of the asset to situations of physical contact, contributing to the mystery surrounding the BGI entity and hopefully minimizing the legal issues.

The model we initially got busy with (HERE and HERE) was a promotional model distributed for free by LineFour (their only free character model). We rather naively assumed that this was an original (although somewhat unfinished) model by LineFour. Later, we found multiple instances of the same model on Turbosquid: HERE, HERE, and HERE, the latter being the actual rip and the others more or less accurate renditions of it.

The ripped mesh suffered from a few defects (disconnected triangles, duplicated triangles, missing triangles) which were fixed. The model was then decomposed into rigid body parts and imported into Oni, along with a ripped and downsampled texture. The troops are available in the newest version of the level0_BGI plugin, with several variants, ranging from nimble assassins to powerful giants. See AE:Plugins#BGI

After a while, we came across another model, less familiar and perhaps even more fitting than Master Chief. It was found on Google SketchUp's 3D Warehouse - obviously ripped from some game, but so far nobody has been able to tell which game exactly. (UPDATE: It's Widowmaker from Unreal Tournament 2004.) Here is a list of SketchUp entries based on the model:

And HERE is an OBJ based on it, split into body parts and UV-unwrapped, but not textured.

Here's a mini-tutorial for rigging this model.

The ideal fighting scheme is Elite with a touch of Mutant Muro. More specifically, the more powerful combos will be backed up by discharges/explosions/etc generated by the armored suit. Jumping will also be dramatically enhanced by the armor. At the moment of writing, no custom TRAM or TRAC are available.

Maybe there can be versions that are large enough to be driven (with roughly Murzilla-themed animations). "Press CTRL to board this mecha." ^_^

(preliminary version shown; far left and right on the image below) 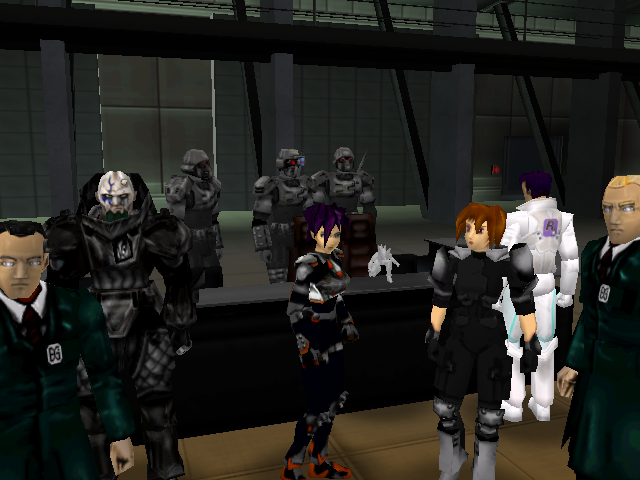 These are the guys who coordinate the covert operations of the troopers and also interface with representatives of the Syndicate, TCTF and WCG (mixing diplomacy and intimidation: references in popular culture include the Men In Black, Matrix Agents, etc). Thus they are effectively the BGI's "face", and since some of them are skilled diplomats it is hard to tell what power and influence these individuals possess within their own organization. It seems unlikely that they are merely field agents carrying out orders. Rather, they are cooperative masterminds, perpetuating the spirit of the pre-Muro Syndicate a.k.a. the Network and that of its Council a.k.a. the Hydra. The boards of directors, if any, are a mere facade, offering the image of a law-abiding industry.

Their badges feature the BGI logo as well as the AVATARA symbol. These act as a deterrent against TCTF troops, because AVATARA amounts to absolute clearance and immunity. The white/shining eyes are a form of borderline-illegal surgery (cyborgization).

Model-wise, the executives are merely retextured copies of male scientists so far. Animations can be borrowed from any comguy-derived TRAC, notably Tankers and Muro. Four variants are available in the newest version of the level0_BGI plugin. See AE:Plugins#BGI

Apart from weapons encountered in the original Oni, BGI uses its own unique arsenal. The few weapons gathered so far are:

Apart from the handgun, they all need to be textured and adapted as Oni weapons, with more or less custom projectiles.

There are other weapons around, from those modeled by Seventeen Seconds to THESE, but they're all somewhat boring.

HERE is a collection of new weapons so far, some of which can be featured as the preferred weapons of BGI. More specifically, THESE TWO handguns (from HERE ) can be the preferred sidearms of BGI executives, whereas as THESE TWO guns look decently badass in the hands of the assault troopers. Apart from those placeholders, there is not much available at this time, e.g., in terms of heavy artillery: rocket launcher, flame thrower, microwave cannon... these are all WIP at best, and not exactly showable; there's THIS but it's not very convicing either (undersized, overtrimmed, and the projectile is neither balanced nor original enough).

The newest version of the level0_BGI plugin incorporates the 4 weapons pointed out above. See AE:Plugins#BGI

A stealth dropship, ignored by the WCG's network of drones, comes readily to mind. The troopers could thus make suprise appearances at pretty much any point in Oni. The stealth aircraft could also consolidate the transition between CHAPTER 13 . PHOENIX RISING and CHAPTER 14 . DAWN OF THE CHRYSALIS. It is always possible to adapt Halo's Pelican, but a somewhat less outrageous cameo will be THIS: this NGE gunship was apparently made from scratch, has "interesting" cartoony textures and can be adapted as a cargo lifter or dropship rather intuitively. HERE is the dropship in OBJ format (the high-resolution BMP texture is unavailable, so the JPG was used instead).

See AE:DeLorean for the resources and the WIP. A luxury/sports car manufactured by BGI, it is literally covered in watermark-style AVATARA symbols (variations in reflectivity), as a deterrent for the TCTF. It is the vehicle of choice of the BGI executives, and can be seen, for instance, outside the Vansam airport, driving away for some obscure reasons as Konoko arrives. Version 20080822 of the Edition uses a minimal substitute for the DeLorean: a 100% black texture applied to the original mesh (which was missing its texture anyway).

An alternative or complement to the DeLorean is the Siva Spyder, which is also available from turbosquid: HERE. The geometry is suitable for Oni's engine and can be easily extracted from the .ma format, which is ASCII; this has not been done yet, however. Given the potential of the DeLorean, maybe the Siva is best used as a civilian car.