SPOILER WARNING; it is assumed you have played the game before reading this page.

Mai Hasegawa, code-named Konoko, is the protagonist controlled by the player in the 2001 third-person action game Oni. She has black hair with purple highlights, and stands about five and a half feet tall[1][2]. Her age is not given in the game's material[3]. She works as a TCTF agent, a police officer who fights technological crime. She is one of only two prime Daodan symbiotes, giving her considerable strength and stamina.

Mai's mother Jamie died while Mai was very young, perhaps while she was still an infant. As the manual indicates, Mai was then separated from her father at the age of 3. Because she did not think about her parents for so long, she seems to have forgotten about any life before she was brought to the TCTF.

When she was 7[4], the TCTF implanted in her a prototype Daodan Chrysalis developed by her father. Although this was done without her knowledge, as mentioned in the manual, she knows she is different from others somehow.

At the start of Oni, Konoko was working under the orders of Commander Griffin. She received mission data from Shinatama, an SLD, and her Chrysalis' development was monitored by the SLD as well as the scientists working for the TCTF, including Doctor Kerr. However, she had not been assigned any missions before the events of Oni.

After completing her training, Konoko was assigned her first mission: a rendezvous with an undercover TCTF operative working in a Syndicate warehouse. Upon discovering the agent's dead body, she found a datapad linking the warehouse to the Musashi Heavy Manufacturing Concern, a suspected Syndicate front.

Following the lead on Musashi, Konoko led a team to investigate the company, but were quickly ambushed by Syndicate forces. While Konoko and her team were trapped within the building, Syndicate forces, under the command of Barabas, attacked a nearby research facility.

Upon reaching the research facility, Konoko had her first battle with Barabas; however he and his boss, Muro, escaped. Konoko pursued Muro to the Vansam Regional Airport, during which time Muro found out about Konoko's neural link to Shinatama, and sent Barabas to abduct Shinatama from the TCTF Regional HQ.

Konoko managed to enter the TCTF Regional HQ as it fell under attack from Syndicate forces. Despite gaining assistance from the besieged TCTF personnel still alive after the attack, Konoko was unable to stop Barabas from capturing Shinatama, and fought him for a second time on the roof of the HQ, as Shinatama was carried away in a Syndicate helicopter.

When Shinatama is kidnapped from the TCTF HQ, Konoko decided to rescue Shinatama personally. Griffin, on the other hand, opposed her decision, stating that he had already sent a strike team to retrieve Shinatama. In spite of this, Konoko disobeyed his orders, and went to the Atmospheric Processor where Muro had taken Shinatama.

While Konoko was able to reach Shinatama, she had been badly damaged by Muro. It was at this time that Konoko learned from Shinatama that her actual name was Mai Hasegawa, and that the SLD had been constructed to monitor the development of a "Chrysalis" inside her. Griffin, fearful of Konoko's unbridled development as a symbiote, ordered Shinatama's self-detonation in order to kill Konoko. After escaping from the blast, Konoko was declared a rogue agent by Griffin.

Konoko next went to the Regional State Building in order to gather information about her past, but the data was stolen by the ninja Mukade right before she could obtain it. Konoko pursued Mukade through the nearby rooftops before cornering him and recovering the disc.

When reading the contents of the disc, Konoko learned of her parents, particularly her mother Jamie Hasegawa -- maiden name Kerr, thus making Doctor Kerr her uncle. Upon locating Kerr in a prison-like TCTF facility, he informed her about the nature of the Chrysalis and revealed that her brother was Muro. Shortly after this, Kerr gave his life to save Konoko's.

Looking for revenge, Konoko infiltrated TCTF Regional HQ and confronted Griffin, with the player choosing whether to kill him or spare him. She then traveled to Muro's Mountain Compound to determine what his plan was, and to stop it. Learning that he was about to send a signal for the world's ACCs to reverse their air-cleansing process, she could only think of one alternative: to sabotage the signal. Shortly after Konoko defeated Muro in combat, the ACCs received the faulty signal, and many of them were destroyed.

At the end of Oni, the casualties are beginning to mount from the polluted air making its way into the cities, but Konoko looks forward to the use of her father's work, the Chrysalis, to save mankind from the crisis.

CHAPTER 08 . AN INNOCENT LIFE is where Konoko first learns her real name. It is spoken by Shinatama, but at that moment Konoko may not be able to absorb much of what Shinatama tells her.

CHAPTER 11 . DREAM DIVER is where Konoko learns most of the information about her parents, Jamie Kerr and Professor Hasegawa. She and her brother Muro are not referred to at all in Hasegawa's diary, except for the newspaper article headlined GRAD STUDENT DIES / MURDER OR MERCY: "Jamie Kerr Hasegawa, environmental activist, top grad student, mother of two".

Konoko is referred to as "Hasegawa, Mai" in a console there. The readout relates mostly to experiments performed on Mai at some point in time.

After scanning Mai, Kerr discloses that Muro, Mai's enemy, is indeed her brother. He does not, however, make any statement as to Hasegawa's fate or whereabouts, nor does Muro in their final confrontation.

"Konoko"
"Kono" means "this" in Japanese, and "ko" means child (or "great", "price", or "sin"!) (source). Hence, "Konoko" literally can mean "this child" to a Japanese speaker, and is often used in this manner.
Although we don't know who in the TCTF would have given this code name to her, her father was Japanese. Also, the TCTF Regional HQ seems to be in Japan, and Shinatama also has a Japanese name.
Despite any "added value" we assign to Konoko's name, Brent Pease admitted HERE that he had no meaning in mind when he created the name.

"Mai"
According to this site, Konoko's true name translates as 'dance' or 'linen robe'; most commonly, "mai" is used in everyday Japanese with the meaning "dance".

Here are the seven outfits sported by Konoko in Oni's chapters, with details about the occurrence and the internal naming:

It is interesting to draw the connection between these 3D models and the 2D renditions of Konoko (by Lorraine et al).

An eigth outfit, k4_D, is referenced in the AISA file for the two TCTF levels (CHAPTER 06 . COUNTERATTACK and CHAPTER 13 . PHOENIX RISING)

Most probably they were a mix of biker gear and casual clothes (not unlike in the "mission complete" screens of Chapters 10 and 13).

Or maybe k4_D was another official suit that Konoko used to wear while at the TCTF HQ (either regular officewear or a uniform)?

There are other clothes-related trivia, like the unused KONOKOundress animation, related to UndressShirt and UndressPants meshes present in Airport (CHAPTER 04 . TIGER BY THE TAIL).

The "undress" bit may or may not be related to level0's shower* particles and/or to the Jail setup and all those other things that were cut from Chapter 4 (security guards, Tankers, more Muro).

Here are the same seven outfits listed in their order of appearance, by Chapter, with some semi-objective commentary.

For an elaborate rationale of Oni's timeline, please refer to the "Added Value" sections of the respective Chapters.

Even though Oni was inspired by Ghost in the Shell, Konoko seems to have been envisioned from the beginning as an aggressive, "gun in your face" action hero, unlike the impassive Motoko. An early story for the game explained Konoko's mindset this way: "Konoko vows to destroy the Syndicate that killed her parents." Over the course of the story, she feels more "betrayed", "guilty", angry and "paranoid" until she finally kills essentially everyone in the game.

By contrast, the final game's Konoko is still emotional, but is also mostly in control of herself, even choosing to spare Griffin, if the player wishes. She also makes wisecracks while under pressure. Instead of a violent ending driven by her paranoia and need for revenge, we have an emotionally ambiguous ending where Konoko stops Muro's plan with a desperate, destructive action, without showing much of her feelings.

One hint at the earlier, unstable Konoko is found in her deranged look in the intro. Konoko was also stated in this development data to have an IQ of 203. While a high IQ is not mentioned in the final game, her behavior at times indicates that she is still very intelligent. See HERE for a more detailed discussion of Early Konoko.

Early versions of Konoko vary quite a bit, as concept artist Alex Okita was probably trying different things. We are missing some of these concepts, but below are the ones we know of: 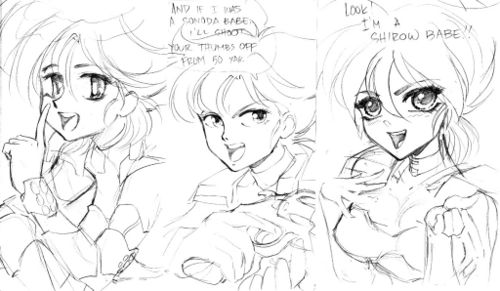 "Shirow" is Ghost in the Shell's author, Masamune Shirow.

Lorraine produced the sketches of Konoko on the right to show her mastery of various animé styles. While she was made the art director of marketing in June 1999, Okita's designs for Konoko were already well in use by that point (for instance, the Konoko in the intro is Okita's design). The in-game model also appears to be based on Okita's art rather than Lorraine's, which is not surprising when one considers that Okita was one of the 3D modeling artists.