For general information about the mech, see Iron Demon.

It is not clear whether we will be able to revive the BGI HQ chapter. If we do, the Iron Demon will probably appear as a boss. It is suposed to either guard the complex, or even to be BGI's designated weapon against Mai. There is a minor chance that the Iron Demon actually is Mai's father... or Muro (captured by BGI and turned into a Daodanized and automotive variant of the Deadly Brain). Whether this will be developed or revealed depends on whether BGI HQ will constitute an alternate ending or not.

This model is mostly OK and low-poly enough to be used in Oni as-is, but it has a lot of non-planar quads, which cause symmetry issues "or worse". It diverges from Bungie's Demon in a few respects, but mostly it's an excellent placeholder (see below).

This model is available from Turbosquid for $1 and, much worse, only in Cinema 4D format. Cinema 4D was able to export it to FBX, but the resulting FBX, although loaded by the FBX SDK, can't be interpreted by the Autodesk converter or XSI's Crosswalk importer. A reasonable solution seems to use the SDK to retrieve the mesh, and then try and replicate the walking animation semi-manually. At any rate, this Demon is quite high-poly and diverges significantly from Bungie's. It is not certain that it will be suitable for use by a modern engine, let alone Oni's. But it can make for some nice renders, sure enough ^_^ 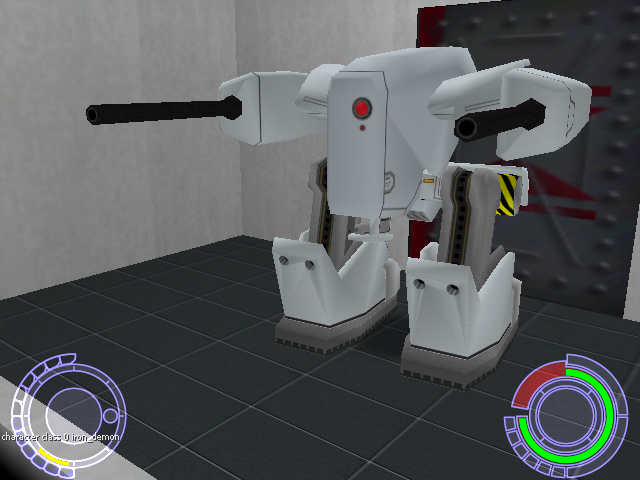 The resources needed to obtain the above screenshot are here: http://geyser.oni2.net/edition/characters/iron_demon/iron_demon_oni.zip

He's of course worthless as a character, but he's already better than nothing, with the trailer in mind.

And we can already say we've officially revived Oni's Iron Demon, as an ONCC and ONCV, at least.

Pretty much everything. The current TRBS has all 19 meshes centered at the character's "feet"; the centers must be made consistent with the supposed joints used for the animations. Idle/walking/turning TRAM need to be authored, as well as a set of aiming screens, all consistent with the Demon's layout of joints, very different from that of the humanoid characters. Punch and kick TRAM will take care of emitting projectiles from the 3 "weapons". Maybe some shockwaves from the feet as well.

Last but not least, the geometry and textures ought to be nicified and, if possible, made consistent with Bungie's Iron Demon. A few issues with normals should probably be figured out before recording trailer footage (asymmetric quads pretty much everywhere + bad normals around the shinguard holes).