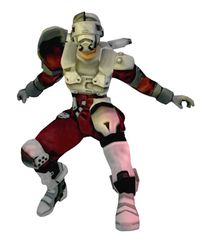 The basic idea for the Ninja is that they're androids similar to the ones in operation at the ACC (CHAPTER 08 . AN INNOCENT LIFE). This is not very consistent with early concept art (which paints the Ninja as largely human), but fits in well with Oni's final content (the WCG's "ninjabots" have the same breathing sounds as the Ninja, the Ninja say "robotic" things like "Sound detected", etc).

Like regulation androids, Ninja often operate in cooperative groups. Unlike regulation androids, Ninja operate far away from their "base", so they must carry their own emitters to stay connected. One idea is that certain Ninja classes have a set of powerful antennas. Those Ninja centralize the awareness on the level of the platoon, and relay the info to and from a higher level of command.

Platoons of Ninja can be coordinated on-site by a Comguy, but that's not necessary. What matters is that the ninjas of a same platoon can be assigned the same alarm group ID. If a Ninja engages the player and the platoon's "antenna ninja" is still alive, then the whole platoon will be notified of the player's whereabouts. If the antenna ninja is dead, there will be no such notification.

Another role of the Ninja is to eliminate rogue elements of the Syndicate on behalf of Mukade. It's not obvious what kind of situation could hint at that plotwise without altering the original missions too much. The most dramatic hint would be in CHAPTER 10 . CAT AND MOUSE, with Ninja systematically eliminating all the Strikers that Konoko leaves behind, to make sure there are absolutely no human witnesses.

Muro's right hand man, but possibly also Mukade's. At the end of CHAPTER 03 . PUZZLE PIECES, he offers to kill Konoko as Muro's van drives away. At the end of CHAPTER 05 . HOT PURSUIT, it is revealed that he has been monitoring Konoko, unveiling the existence of Shinatama. Following Muro's orders, he tells Barabas to retrieve Shinatama and in CHAPTER 06 . COUNTERATTACK he is seen taking part in the raid himself, giving the order to "converge" to "all units" involved. He is then seen in CHAPTER 07 . A FRIEND IN NEED, standing by Muro as Shinatama is being tortured, and in CHAPTER 08 . AN INNOCENT LIFE, following Muro on his way out of the ACC. He does not appear at Muro's side in CHAPTER 14 . DAWN OF THE CHRYSALIS, and he is also not the one guarding the STURMANDERUNG console.

Mukade is the only humanoid in Oni who does not have any exposed area of skin ("ninjabots" and SLDs don't count). He is noticeably more human than his Ninja subordinates (even somewhat of a poet). However, his mask and vocoder make him a faceless, voiceless entity: his identity begins and ends with what he says and does. This also makes him virtually immortal: he is never unmasked, so he can always be revived even he doesn't actually survive his battle with Konoko.