From OniGalore
< OBD:BINA‎ | OBJC
Jump to navigation Jump to search

These settings affect the behavior of an AI that's running for a console (e.g., script command *ai2_doalarm*). For an example of how flexible the AI is when using alarm behavior, see this demo from Loser where an AI completes Chapter 1.

alarm search distance
area around AI, where engine checks if there is some console with 40 bit (see CONS).
Alarm enemy ignore distance
This one specifies an "ignore range". Enemies which are inside this range are not ignored but AI doesn't attack them.
Alarm enemy attack distance
Zero by default.
This one specifies an "attack range" around an AI running for an alarm. When there is an enemy inside, AI stops running for the console and attack the enemy (if AI knows about him, of course)
Nevertheless AI still keeps in mind that it should run for the console. So when there is no enemy inside this range and fight timer runs out, AI resumes running to the specified console.
Fight timer
When AI, which is running for the console, is engaged in a fight and enemy manages to disappear (either by phase-cloak or simply by hiding behind some corner), AI tries to chase him or looks for him. Alarm timer specifies how long should AI chase/look for the enemy. For chasing, timer starts when the enemy is outside *Alarm enemy attack distance*. Of course when the enemy escapes even from *Alarm enemy ignore range*, AI abandons him automatically.
Alarm damage threshold
Specifies how long AI, which is running for the console, remembers someone hurt it. Until this timer runs away, AI doesn't tend to use console. It only stays in fight stance near console, ready to fight. If someone hurts AI which is running for the console, then escapes and then tries to hurt it again while this timer isn't finished yet, AI remembers him and initatively attacks him the moment he steps inside *Alarm enemy attack distance*.

Whole alarm logic can be tripped by:

First of all, pursuit is NOT when you have been seen and now running away. If you do that, AI is in *combat* mode, not *pursue* mode. You are pursued only when you have NOT been seen by central vision field (see ONCC). So if some enemy does sound that touches AI's sound detection sphere, or when some enemy interferes with AI's peripheral vision field, AI goes into pursue mode with him. In this mode AI uses special behavior for investigating. According to the EXE, possibilities are (dunno if it is in proper order, it is raw EXE rip):

What AI does while in pursuit mode depends on the last values in CHAR.Go there for further info.

So...what is the pursuit distance??? It is distance that is AI allowed to travel from its original location for *pursue* purposes. Set it high and AI can run through whole level if it hears or spots something. Set it low and AI will do just a few steps in a direction of disturbing action.

Point is that if you set melee override to some range (for example 03 - short range) and then try it, you will see that the moment you are closer than minimal shooting distance AND you are in range which enables it (short range in this example) AI will switch to melee mode instead of running away.

How it switches back to weapon when you run away back into min.shoot.dist. is not clear. So far it happens automatically after some time. Where is timer for that??? Let us know, if you know....

Try using ai2_report on a character, I noticed a timer next to the mode or something of that sort - Gumby :) 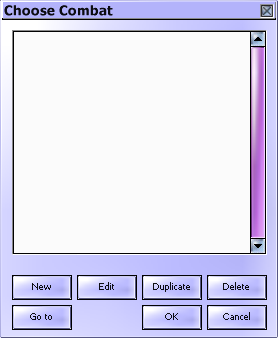 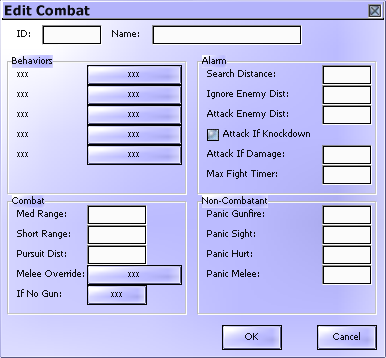