"Then, in the fall of 2004, Ssg started a site on the newly-opened Oni2.net, a domain run by Alloc, carrying over and translating information that Ssg had originally placed on another site in his native German."

The offline version of the site was created during fall 2004. It first appeared online in January 2005 and was hosted on a German university server. The site itself was completely in English, only some notes for myself were in German.

Starting from the scratch without knowing pretty much about anything: http://ssg.oni2.net/history/oni.htm

Ah, I see, thanks for the correction. I think I assumed it was originally in German because I knew the domain was a German site (and maybe some other reason which I forget now). The date of your oni2.net subdomain's start was also a guess based on when oni2.net opened. So I'll fix that part. Did you move it to Oni2.net soon after putting in on the university site? --Iritscen (talk) 02:57, 27 March 2014 (CET)
By the way, let me know if I'm not supposed to capitalize "Ssg". That's how it is on the wiki, but in some places I see "ssg". --Iritscen (talk) 03:02, 27 March 2014 (CET)

geyser and I started moving the data to the wiki in December 2005. In April 2008 I moved the site to oni2.net.

ssg or Ssg: Nobody cares, least of all me. It's just an ID I picked for Oni. Other forums, other IDs.

Something else: As fas as I know, OniTools was never ported to Windows. There is a program called OniTools.NET, but this has nothing to do with Ian Patterson's OniTools. See images below. 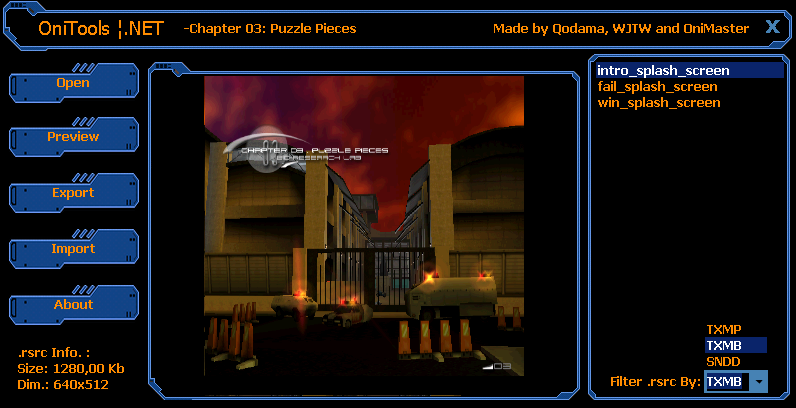 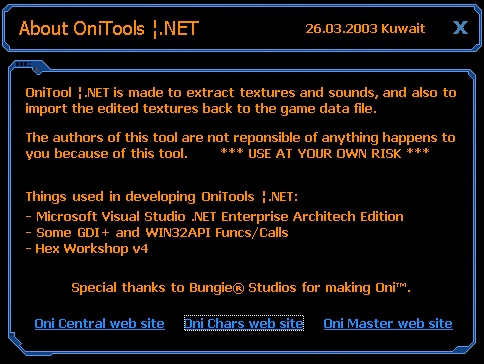 Oh wow, that's interesting. I forget where I thought I read that the .NET app was a port, but they would have acknowledged on the About page if they were basing it on OniTools, so I guess I was mistaken.
"In April 2008 I moved the site to oni2.net." Hmm, that late?! Well, the Archive shows your site on oni2.net as early as Nov. 2007, but I figured that the site must have appeared on oni2.net much earlier, because I thought you moved the data from there to the wiki. You're saying that you moved it from the university domain to the wiki, and much later moved the original site over? Just want to be clear on this. --Iritscen (talk) 22:27, 27 March 2014 (CET)

Oops, yor're right. My mistake, sorry. I read the wrong row in my e-mail program. The correct date is September 2007. (On Semptember 8th, 2007, Alloc sent me an e-mail with the access data for the ssg.oni2.net account.) And yes, the data was moved from the university domain to the wiki first. 2 years later the site itself moved from the university server to the oni2.net server. (Alloc asked me in 2005 if I'm interested in moving the site to oni2.net, but I declined, because it was easier to update the data on the university server (direct access via the Explorer window, no FTP needed)) Ssg (talk) 23:19, 27 March 2014 (CET)

Okay, thanks for the help. By the time I wrote this article, like History of the Oni community, it was already hard to research the earliest events. Though I was fortunate to be able to interview Campbell for the Community article, I didn't get to talk to many of the people involved in this Modding article. So instead I decided to guess at some points, and hope that others would eventually correct any misinformation. --Iritscen (talk) 23:37, 27 March 2014 (CET)

Not as much of a pack of lies as it could have been, but still a helluva pack of lies. A good thing this isn't linked to from anywhere but Current events, but I don't know when and if I'll be able to get the story straight. Thanks a lot, I guess -_- --geyser 12:43, 13 November 2008 (CET)

All I've done is basically embellish the first two parts and add the third part. I researched everything as much as I could and spent hours reading old OCF threads. But of course I knew there'd be some errors. I was considering adding a link to this on the Main page, but I'll hold off for now if you think this page is so dramatically erroneous. --iritscen 16:19, 13 November 2008 (CET)

There is one important thing I just realized is missing (from the original text too): talking about how Loser fixed the AI. That's something that must be addressed in the article. --iritscen 20:48, 13 November 2008 (CET)