From OniGalore
< OBD:BINA‎ | OBJC
Jump to navigation Jump to search

Info about whether technique will be considered as "low", "high", "unblockable" or whether it causes block-stagger or block-stun is obtained from technique's move's TRAM's attack part (see OBD:TRAM/raw0x14).

For everybody's convenience, I've grouped the techniques with the 0x40 field set to 1 HERE.

0x40 set to 2
This is true for the following techniques :
For an exhaustive listing (complete with actual classes), see HERE.
That has to be either "Fearless" or "Generous Dir" (whatever that means).
"Somebody better investigate soon." ^^

There are 45 melee profiles.

It seems that typing different ONCC model names here allows the melee profile to use some "trademark" moves:

If you know something else, feel free to complete it. The question about this "trademark" moves is: is it specified in the ONCC or somewhere else ???

All profiles in order of appearance in the list

All profiles sorted by ID 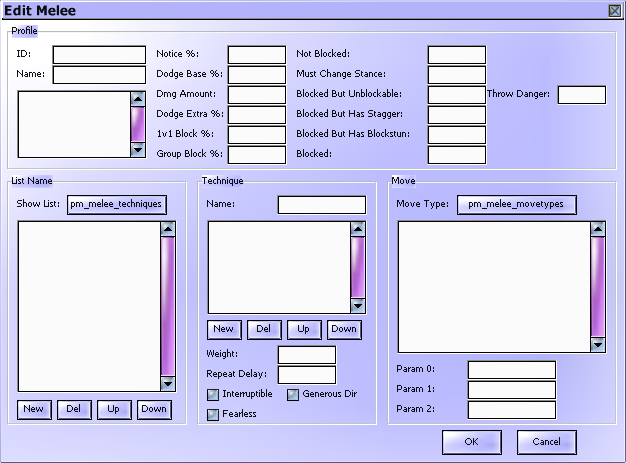