From OniGalore
< Oni matrix
Jump to navigation Jump to search

Below is a detailed account of the three major iterations of the Oni matrix translation. Glorious, isn't it? 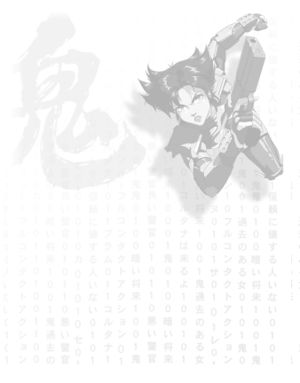 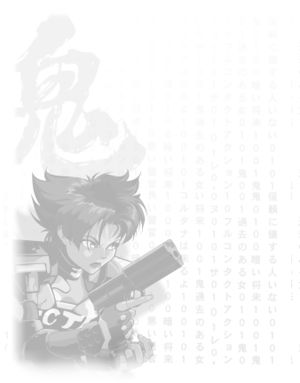 In 1999, well before Oni came out, "Dave" on the original Oni Central Forum posted this breakdown of what he could decipher from the background of his Oni notepad. Either Dave was not familiar with Oni's tagline ("A dark future... an uncertain past... no one left to trust."), or he intentionally chose to give a naive translation of the phrases taken from the tagline when he encountered them, perhaps to point out the weaknesses in the Japanese used by Bungie. 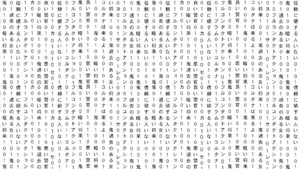 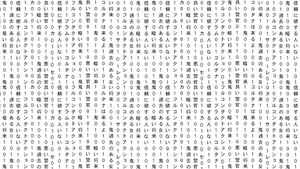 Against white background for easier reading at full size.

In 2011, demos_kratos responded to Dave's translation when I posted it on the wiki for the first time (along with the japanese matrix.psd image from the Bungie West archives, more complete and more readable than the notepad pages that Dave had squinted at). He (demos_kratos) may have been more focused on the existing translation by Dave than on going over the original image character by character, but he did discover that there was more to the appearance of "Cortana" than just the name.

In 2014, I finally decided to give this a more thorough look than I did in 2011, since no one else had broken down the image character by character and actually shown their work. My translation can be summed up as:

Previous to this, no one seems to have noticed the "good cop" in "good cop, bad cop", nor paid attention to any of the binary sequences. Details below, for the dedicated.

There are 42 columns and about 28 rows in the image (that's seven-tastic!). It is not contiguous writing from column to column like the old Japanese style of writing vertically right to left; each column is unconnected to its neighbors. The sequence of columns repeats halfway through, and each column repeats a string twice from top to bottom. So only one-quarter of the image is unique. Here's a masked image that shows the unique portion of the image. 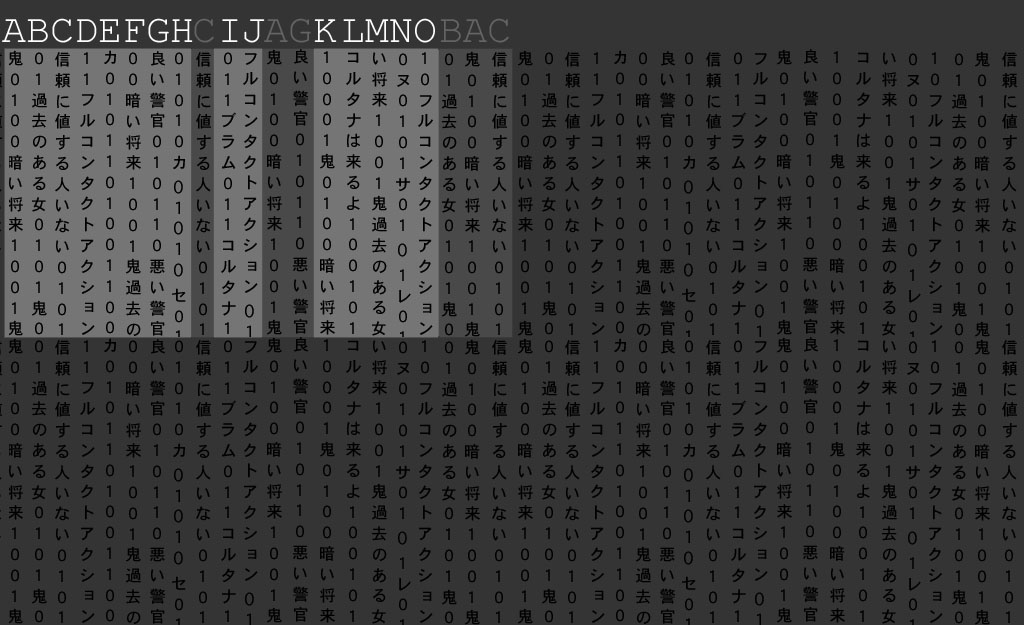 Additionally, out of the horizontal 21-column sequence, there are six duplicate columns. I have lettered the 15 unique columns with the letters A to O. Also, some of the 15 columns have duplicated sequences of characters. This leaves, by my count, seven unique phrases, when all is said and done. Notwithstanding that I don't actually know Japanese, I've painstakingly identified the characters, and under "Character transcription" below, I reproduce them as text (handy for anyone else's translation efforts), and then in "Detailed translation", I discuss each phrase's meaning as far as I can ascertain it.

Now here is a translation, partly based off the efforts of those who came before me. Each column is reduced to a single instance of its repeating character sequence.