From OniGalore
< Talk:Anniversary Edition
Jump to navigation Jump to search

Back then when I checked I couldn't find the demo, but since it's also on the mod depot now I guess it won't die... Today I downloaded the demo and split and recompiled the levels so that they are in actual PC retail format, .dat and .raw. But now the game shuts down while reading level0. I probably will have to replace the exe? Will try another day. I want to see if you can install AE on a converted demo. --paradox-01 (talk) 20:19, 24 April 2019 (CEST)

There's no way the demo EXE would know how to read dat/raw data. But replacing the EXE with the retail one would work. As far as installing the AE, there's probably multiple ways in which it's incompatible with the demo (e.g. expecting the complete set of level files) -- hence the to-do item! --Iritscen (talk) 20:29, 24 April 2019 (CEST)

Alright, just tried and installed AE. And guess what, it worked. 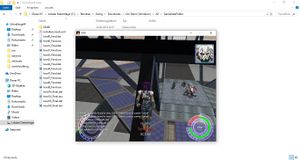 I was able to play all three levels.

So you only need a script that would detect the demo status for the AEI.

Yes, there's no point in allowing mods to be installed if they are for non-demo levels, so we would want to gray out or flag those mods. I haven't contributed to the current AEI at all, so yes, that would be Alloc's job. You could file a ticket if you want. --Iritscen (talk) 23:32, 24 April 2019 (CEST)

You can always get the latest version on https://tmp.oni2.net/. I don't know exactly what Vago did, but the most prominent change is probably that Tools should go to the Tools-subfolder of the Edition (just launching the AEI2 from Oni/Edition/AEInstaller/AEInstaller2.jar should create that folder as it downloads+installs Onisplit). If you need any further info just ask me ;) --Alloc (talk) 18:54, 14 January 2013 (CET)
Also, please see the WIP change log here. Thanks for paying attention to the wiki ^_^ --Iritscen (talk) 19:08, 14 January 2013 (CET)
Thanks guys. I need to update a few things like the launch of the new app in java directly from Vago. Another important thing will be update the package generator tab with the new AEI2 features. Btw Vago doesn't depend where it resides so that's no problem. Script 10k (talk) 11:26, 15 January 2013 (CET)

Hi, what do you mean with the "Add BGI Storyline - Work BGI content into actual storyline"? If is to script some part of the new level I can help. :)

I think one problem is that we couldn't decide how to do it. I think one option was to re-record the FILMs, and another was to replace the recorded animations with scripting, so we can tell the AI to run instead of dash. Anything to say here, Gumby? --Iritscen 22:19, 9 June 2010 (UTC)

Regarding adding AETools to AE Installer, why not add a few basic modding features to the installer.

That will make it easier for new ones to get started in modding the game. Perhaps in the future AE Installer can become a full featured modding tool. EdT

I don't envision the Installer ever doing more than installing and updating the AE, personally. Modding features are a whole other set of functionality from what a mere Oni player needs, thus it would not be a good fit to try to graft that separate feature set onto the Installer's current functions.
The features you describe above are basically addressed by Gumby's Explorer extension and demos_kratos' GUI in Windows, and the AE Tools for Mac. In time we should be able to develop a separate modding tool which does the above, as well as makes packages. Eventually that program could be made into a full-on GUI for OniSplit that edits each file type a lá OniUnPacker. So you see why we don't really want to start down that path with the Installer. --Iritscen 20:48, 22 July 2009 (UTC)

Indeed, I don't quite think the installer will ever do much more in the way of modding, other than an option to extract .oni files to a folder, once the bugs are killed. :/ To be honest, I'm rather sick of the thing atm, though it just might be my mood tonight. Gumby 07:22, 23 July 2009 (UTC)