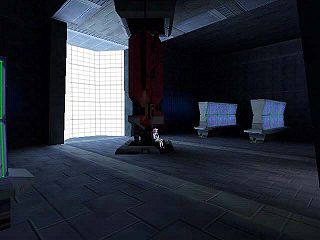 An early (pre-beta) view of Shinatama in a Damocles room, before the current open floor plan. 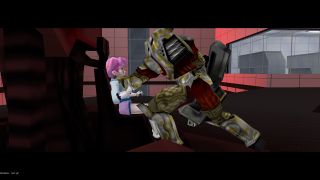 Damocles is the (quasi-canonical) name of a massive computer in Griffin's TCTF Regional HQ used to provide Konoko with tactical data (via Shinatama) and to monitor her Daodan symbiosis. The central area where Shinatama sits, near the top of the HQ building, is prominently featured in Chapter 6's kidnapping cutscene where Barabas yanks Shinatama from her "docking station".

Damocles is a tall structure with cyberpunk elements. The final entity as seen in Oni is quite similar to the initial concept art except that the art had "DAMOCLES" printed on its chassis, whereas in Oni the name is omitted – and, for that matter, is never mentioned at all.[1] Even so, the name is considered canon due to it being repeatedly mentioned during Oni's development.[2]

Structurally, Damocles has a dominant central position in the HQ building's layout, as it is located at the top end of the vertical power line that spans every floor (the bottom end is in the basement where the Omega Vault is, and the three "power substations" are roughly in the middle).

Shinatama sits in a chair attached to the Damocles mainframe, and it is suggested that she is not just an operator but a key component of the system – Shinatama's seat has special sockets under the headrest, which connect to cables in the back of Shinatama's head. From here, Shinatama uses neural links to exchange tactical data with field agents such as Konoko, giving them access to "scanning technology and [a] knowledge database" during missions.[3]

However, Damocles also serves the classified purpose of monitoring Konoko's Daodan symbiosis – by channeling, processing and/or storing the data that flows in through Shinatama's neural link. This monitoring is kept secret from low-level TCTF staff,[4] as well as from Konoko herself. Additionally, Shinatama's nature as Konoko's "sister soul"[5] apparently allows for a stronger neural link between the two, allowing Shinatama to receive more data from Konoko than would otherwise be possible.

Damocles features a Marathon logo on the chassis as an Easter egg.[2] Unlike the "DAMOCLES" name, this logo appears both in the concept art and on the final in-game model.

Etymologically, the name Damocles (Δαμοκλής) is a combination of "kles" (Greek for "glory"), and "damos" (Dorian Greek variant of "demos", i.e., "people"), thus meaning "glory of the people". A looser interpretation is "glory of the nation" or "glory of our land", making it a somewhat patriotic version of Pericles, which means "glory all around" or "glory far and wide" (Heracles also comes to mind).

In popular culture, the name is mainly associated with an anecdote of Greek/Sicilian history (4th century BC) known as "the Sword of Damocles", cited by Cicero in his Tusculanes.

Thus the name typically denotes risk and precariousness, and is appropriate whenever an enterprise is "hanging by a thread" and may fail dramatically due to a single event beyond anyone's control.

In Oni, Griffin's secret monitoring of Konoko indeed fails rather dramatically. A more subtle analogy with the anecdote is Shinatama's vulnerability while sitting on an otherwise empowering "throne".

That said, going by Alex Okita's words, Bungie West seemed oblivious to the ominous connotations and only used the name because it sounded cool[2]. It may have also been intended as a connection to the Marathon character named for another mythical sword, Durandal, considering the Marathon logo placed just below the name of the computer in the original concept art.